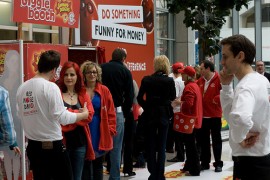 A BBC Panorama investigation into Comic Relief has shown that the charity invests in tobacco, arms and alcohol, despite its ‘holier-than-thou’ ethical claims and telling the public that every penny it raises goes to the developing world.

The real issue here is not solely Comic Relief’s hypocritical investment policy, but rather the close relationship between the charity and the BBC – something which Panorama or subsequent coverage of its investigation has failed to spotlight or explain.

Every year or so, the corporation clears its schedules for Comic Relief. This is an extraordinary facility and it has led to the charity raising the staggering sum of £909m. It has become so wealthy that it can afford salaries of £130,000+ for senior staff.

The BBC supports Comic Relief not because it is an exceptional charity doing outstanding work, but rather because the corporation regards providing aid to developing countries as the ultimate good. Another reason is that Comic Relief is a cheerleader for schemes that they claim tackle ‘climate change’ – something which the BBC also intrinsically supports, in general reporting, at Trustee level and especially through the BBC World Service, which for decades has staunchly championed both overseas aid and measures to
tackle the perceived threat of ‘climate change’.

The BBC has worked assiduously behind the scenes over the years to support Comic Relief. An example of the cross-fertilisation and BBC cheerleading is that Lord Hastings, a former head of Corporate Social Responsibility at the BBC, was active for almost a decade in promoting the climate change agenda while sitting on the board of Comic Relief.

This rat’s nests cross-over continues to this day. On screen, the BBC doggedly – with clear disregard for normal rules of impartiality – pursues its climate change agenda; at the same time Tim Davie, who was acting Director General of the BBC before Lord Hall assumed the role in the summer, and is now chief executive of BBC Worldwide, has recently been appointed chair of the Comic Relief Trustees. One of his colleagues is another veteran BBC senior executive, the former Controller of BBC1 Peter Salmon.