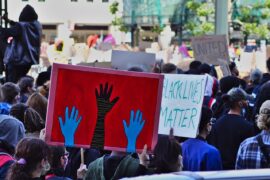 Nicholas Burnett: Can Tim Davie Turn the Tide of Bias?

This is a Guest Post from Nicholas Burnett from The Conservative Woman:

THE paradox of the Western World is encapsulated by the angst the BBC so willingly brings upon itself. Once a central plank of British culture, it is now part of a pro-globalising bourgeois media-set who will report ‘largely peaceful protests’ straight-faced against a backdrop of burning cities. It’s as if there is something the rest of us are not privy to. And of course, there is.

Black Lives Matter, a far-Left Marxist organisation, was immediately hailed. BBC coverage continually affirmed the BLM narrative, at times taking a campaigning tone for the cause. Like many, I objected to the clearly favourable line on a movement which descended into rioting, but the wider issue is the corporation’s merger with Left-leaning identity politics.

I complained to the BBC in June. I pointed out that under the BLM narrative white people are summarily accused of racism; that the BBC fails to balance its sudden specific interest in police brutality with a wider context; conflating American experience with the British is absurd and that the far greater cause of violent black deaths is ignored. I finished ‘I despair for race relations following the hysterical coverage and tensions you have abetted’. And I genuinely do. If anyone at the BBC thinks its approach will have a generally wholesome impact on race relations they are deluded. One only has to see the thinking behind UKBLM how divisive their message is.

In response, the BBC claimed its reporting ‘reflects the global impact . . . and the strength of feeling . . . galvanised’ insisting that it ‘will continue to report impartially on issues highlighted as this story develops’. When it talks about ‘global impact’ and ‘strength of feeling’ one can only assume it is referring to its own echo chamber which includes other Leftist cultural institutions, academics and campaigners. You can respond back to the BBC if you are unhappy with its first reply, which I did, and two months on no follow-up has been received (rather an email suggesting I try Ofcom as they are oh-so-busy right now).

BLM has explicit aims to destabilise society. Surely its inflammatory messaging is relevant to the looting and violence continuing in America as well as abuse of and attacks on police officers on both sides of the Atlantic? When 36 police officers were injured in London in that first weekend of unrest in June, the BBC talked of ‘largely peaceful protests’ and omitted to inform viewers about what BLM thinks about our police. None of this matters to the BBC in the same way it would (and did) do when those ‘protesting’ are white nationalists. The BBC believes it has an active duty to stand against racism but it conflates the narrative of activism with reporting, apparently assuming the righteous position of BLM from the outset.

Throughout the summer, in the midst of racial tension stoked by Marxist agitators, the BBC chose to amplify individuals’ claims of racism against the police without challenge or context. The same sense of grievance plays out in much of the ‘woke’ narrative too often consuming BBC News output. Many black people don’t feel deeply offended by white society. Many gays feel awkward with train carriages painted in their name. Many women roll their eyes when the next round of gender-pay grievance figures is headlined. Conservative views are omitted from the BBC’s narrative as it gives credence to ‘strong feeling’ over balanced rational coverage. Britons do care about fairness, tolerance and equality but not the version pushed by activists.

Michael Collins, author of The Likes of Us: A Biography of the White Working Class, touched on the issue of race in a recent interview with Peter Whittle: ‘We kind of covered it ’cos we had to . . . we are being educated by people that didn’t have that experience’.

White working-class Londoners did the BLM thing 40 years ago, moving through and beyond racial tensions as a community that got on with it. The liberal middle classes have apparently suddenly discovered this cause, delivering the message with a tone that insists on national self-reflection and demands a review and cleansing of the past. Many see through this preaching for what it is: vanity.

The ruling elites with a globalised worldview in both the USA and here in the UK were sent packing by electorates in 2016 yet a bourgeois liberal class have retained their position as cultural custodians and decanters of information in the media they control. Trump and Brexit were shocking to these elites but self-explained as mere interruptions to their assured hegemony which with the ‘right information’ the electorate could and would be corrected to understand what’s good for them. The explanation BBC Newsnight editor Lewis Goodall has for public dissatisfaction with output lies somewhere around the retort that ‘sometimes the truth hurts’:

I’ve been trying to think of a way to show that often, when someone attacks the BBC or other broadcasters for not being impartial it’s really because it’s saying something they don’t want to hear and would rather have their own views reflected back at them.

Well, here we are. pic.twitter.com/hnotwEtIgY

Unfortunately there is another ‘truth’ to which the BBC is oblivious: Brexit didn’t go away and far from being shamed as an embarrassing irony of the misinformed, Trump is hot on the heels of Biden in the American polls and may well be about to take round two. What are the liberals not seeing? Perhaps they, too, need ‘unconscious bias’ training about working-class Britons?

The BBC continues unabashed with a declaration for more diversity. What it sees is not unique among our institutions’ worldview: race, sexuality and gender have become primary factors in the worth and measurement of people. For example, after the selection of Kamala Harris as Biden’s candidate for vice president I was left knowing little about her beyond her sex and race – I could have figured those out for myself. By choosing this path it taps into a navel-gazing narcissism which will only demand ever more attention.

For institutions, identity politics may cynically keep bureaucratic claims of inequality and discrimination at bay but ‘being seen to do something’ hardly lays the foundations for lasting change or growth. For the individual, identity politics may help the existentially weak claim a sense of Self, but it hardly builds real character, resilient enough to integrate into the whole of society ‘just as oneself is’. Last week the Huffington Post reported claims of institutional racism within the BBC with employees of its Africa service complaining that having a white manager is akin to ‘working the cotton plantations’ of old.

This really is what you reap when you sow a vision of humanity that goes no deeper than the immutable characteristics of birth and assumes those are the determiners of our life experience.

We are told that incoming director-general Tim Davie is seeking to reform the BBC and make its output more politically diverse. But will he be able to turn back the tide?

Image by Patrick Behn from Pixabay