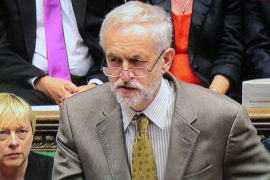 This is a guest post by Paul T Horgan of The Conservative Woman, where this article was first published.

The membership of the Labour Party is revolting.

A group styling itself as Labour Against Brexit has written an open letter to Jeremy Corbyn, urging him to whip his MPs to vote against the Government’s Article 50 Bill. This letter reportedly attracted 5,000 online signatures from Labour members within three days.

The authors make their views very clear about Labour’s historic position on the UK’s membership of the EU:

This is simply not true. The authors write from a position of ignorance over their own party’s history.

The Parliamentary Labour Party has on numerous occasions voted, while in opposition, against EEC membership, most notably in a debate in October 1971 over the motion:

This motion appears the mirror-image of the Article 50 vote.

Labour outside of Parliament was split before the 1975 referendum, with a special conference voting to leave.

In 1983, Labour’s manifesto stated they wanted to withdraw from the EEC.

“[…]British withdrawal from the Community is the right policy for Britain – to be completed well within the lifetime of the parliament. That is our commitment. But we are also committed to bring about withdrawal in an amicable and orderly way, so that we do not prejudice employment or the prospect of increased political and economic co-operation with the whole of Europe. “

Labour has, in fact, been flip-floppy over Europe for decades right up until about 1989.

By contrast, official Conservative policy has been clear and consistent since 1961: to join what was then the EEC, and to work with our European partners in this project, occasionally seeking reform, rebates, special deals and other exclusions when policy moved out of the Conservatives’ comfort zone. This was the case even under Iain Duncan Smith. During our courting and membership of the EEC/EC/EU, no Conservative Party leader advocated or voted for Brexit. Numerous Labour leaders did. It is only as a result of the referendum that official Conservative Party policy has changed.

EEC membership was opposed by Labour on numerous occasions. Jeremy Corbyn himself was a Eurosceptic. The only benefit he could see of the EU was in employment and environmental legislation, and that’s about it. But this is hardly surprising. The basis of the EEC was that the economies of the member states were capitalist with state-owned enterprises forming an minority of aggregate commercial activity. This pro-capitalist sentiment was amplified during the Cold War, as a clear, but not necessarily widely stated, objective of the EEC was to prevent any member state from falling to socialist revolution as a consequence of economic collapse. This must have been anathema to arch anti-capitalists such as Corbyn.

Labour’s ‘long history of supporting membership’ actually stems from about 1989, when they made an interesting discovery. French socialist Jacques Delors was President of the Commission, and Labour cottoned on that if the Conservatives, who appeared at the time to be able to remain in power forever, did not pass social and employment legislation that Labour wanted, then the EEC could issue it as a binding directive, and were more than willing at the time to do so. To the Conservatives, this was socialism by the back door, to be resisted. Labour’s, or at least the sane, non-Corbynite wing’s love affair with the EEC started at roughly the same time as Margaret Thatcher’s late-1988 Bruges speech cooled the euro-ardour of some Conservatives.

Some Labour members do not want this love affair to end. Others are just looking over their shoulders at a revanchist Liberal Democrat Party that now has a new bit between its teeth. The Lib Dems gained 11 seats in 2005, or more seats than they now have in total, after their opposition to invading Iraq, and now seem poised for yet another single-issue-based comeback. That is the true reason behind Labour jitters, which includes some front bench resignations with the promise of more. Some MPs are hearing hoof beats behind them.

Labour has always found the topic of the EU an awkward one because their response can only be ideological, and EU membership is actually a technocratic issue. Labour does not do technocratic issues well. To them, policy has to be based on dogma before pragmatism. They have flip-flopped repeatedly over the last sixty years on Europe. This is just the most recent example, but is informed by a genuine fear, as the party scrabbles to find a policy that will not lost them votes to the Lib-Dems and UKIP at the same time. Labour, or a portion of them, is attempting to rewrite their history of switching horses so they can steal the Lib Dem’s tack. According to some Labour members, ‘Ignorance is Strength’.